Between Worlds: A Birth Story, Part 3

When we left me, I was kneeling on the bathroom floor brushing my teeth. I was still needing to find a comfortable position. We tried putting a stack of pillows on the floor so I could kneel leaning forward on the bed, but that didn't work for me either. Kim suggested I get on the bed and lean forward on the birth ball. That position was perfect. I used the ball to help me rock, sometimes back and forth, sometimes side to side. I started saying "peace" out loud during the pressure waves. Kim said that when I had gotten off the birth ball, the waves had suddenly gone from about 6 minutes apart to 3 minutes apart. They also let me know that Lorri was in about 25 minutes away, and Kristin was coming and bringing the assistant, Kelly, who was a nurse. I felt some strange sensations above my pubic bone--I wonder if it was the baby's head rotating or moving down. I suddenly wanted my t-shirt and pajama pants off, so I took them off, and was wearing my swimsuit top (which I had put on under my shirt after my shower that morning) and some mesh panties I found in my birth kit. Then, I sat up on the bed. It seems like a strange choice of position, but it was really comfortable at the time.

My midwife Lorri arrived. She said she would check my vitals before I got in the tub and went to get supplies. I got off the bed to go to the bathroom and then Lorri came back and took my blood pressure and temperature, and listened to the baby’s heartbeat, and all was well. I got in the tub. The tub was big and deep and I loved how I could get into all different positions in it. I took off my headphones and we played Hypnobabies out loud because I didn’t want to accidently get anything wet that wasn’t supposed to get wet. I reminded my team about the video camera, and my husband filmed me in the tub, including one pressure wave, and then went out of the bedroom and filmed the other people in the house The water in the tub was pretty hot, but I like hot water, so I didn’t really mind, until I had a few pressure waves in the tub and got really hot during them. Kim brought me a cold washcloth to put on my neck to keep me cool, but eventually I just had to get out. I think I went to the bathroom again, and then I was leaning on the side of the tub during a wave and I felt the need to yell at the peak of it. Lorri heard this, and came in. I told her I thought I was feeling pushy. She said to just try to let my body do most of the work and only push when I couldn’t help it. She asked if the water was too hot and I said yes, so she and my husband dumped in a few bowlfuls of cold water. I got back in and the temperature was much better.

Kim was filming now, and my husband knelt near the tubKristin and Kelly must have arrived around this time and came into the room and set stuff up. They were behind me and very unobtrusive. I remember turning around to make sure they were there a few times, because I guess knowing they were there was reassuring for me.

I remember reading once that in some tradition somewhere (I can't remember where), the birthing woman is thought to have to travel to the underworld to claim her baby. The beginning of pushing was definitely the most challenging part for me. Feeling that much power moving through my body was overwhelming, and I didn't quite know how to respond to it. At the peaks of the waves, when I couldn’t help pushing, I would vocalize loudly, because that seemed like the best way to release that intensity. I changed positions a lot, and loved the ease of movement in the water. I usually knelt low in the tub or was on all fours between the waves, and often during them, I had to go to a high kneel and throw my arms around my husband. He gave me Hypnobabies cues which helped me relax better. I remember apologizing for getting him wet. At one point, I was on hands and knees and lowered my face so close to the water that my bangs got wet.

Soon, I felt the baby’s head coming down and I said something like, “The baby is coming out! The baby is coming out!” It was almost like I didn't really expect the intense part to actually end, but the baby moving down meant it was definitely going to. Lorri, who was next to the tub on my left, turned to my husband and asked if he wanted to catch his baby, and he must have said he would because she started giving him instructions on how to do it. I switched from kneeling to a deep squat. With the next wave, pushing just happened. I roared, and the head became visible. I remember saying something about how excited I was that we were almost there. As the head crowned, I leaned back, letting my legs float forward in the water and my head rest against the edge of the tub, supporting myself with only my arms and head, while the rest of me floated. With the next wave, the head was out, and with the one after that, I eased the shoulders out, and out came our baby at 8:39 pm!

My husband lifted the baby out of the water, and I sat down in the tub and took my baby into my arms. He looked to see if it was a boy or girl, and exclaimed, “It’s a girl!” I was shocked because I had myslef convinced it was a boy! She gave a small cry and then got quiet and looked around.

My mom brought our two older kids in. It was neat for them to get to meet her so soon after she was born. Our son, who is 21 months, was a little more interested in the water, though, and put his hand in it (someone washed his hands), and he wanted to take his pajamas off and get in, too, but we didn't let him. The cord was short, so I was limited to holding her against me with her head on my chest, just out of the water. Lorri encouraged me to talk to the baby, so I babbled to her about all kinds of things as we waited for the placenta.

I had to push pretty hard to get the placenta out, and the membranes were trailing and full of clots. Then my husband cut the cord and Kristin helped me get out of the water and into the bed with the baby and then the baby had her first nursing. No one but me held her for over an hour after the birth. It was so peaceful and wonderful. When we weighed and measured the baby, she was 6 lbs 11 oz and 20 inches long. And perfect. 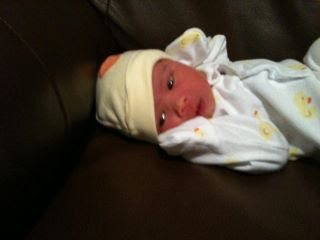 I was amazed at how minimal the damage to my body was. I didn’t tear with my second birth either, but this was even better. My vulva wasn’t even swollen and the little bit of soreness I had went away in a few days. I think it was mostly because I did mother-directed pushing this time and because the water acts as a big warm compress.

One of the names we gave our new daughter is shared with my mother-in-law’s sister, who passed away a few days later, in my mother-in-laws arms, soon after she arrived at her bedside. I am struck with the similarities between their transitions, one into, the other out of this world. I am so blessed to have been able to give my daughter a transition into this world that was gentle and loving as well as safe. Perhaps when we come out on the other side, we will be gently lifted into peace and parental love.

End? No, the journey doesn't end here. Death is just another path, one that we all must take. The grey rain-curtain of this world rolls back, and all turns to silver glass, and then you see it . . . White shores, and beyond, a far green country under a swift sunrise. -Gandalf the White, Lord of the Rings: The Return of the King (film version)