Good nutrition is important for everyone, but we know it's especially important during pregnancy when your body needs extra nutrients to build a body for your child. Dr. Tom Brewer, who worked with mostly low-SES populations, found that helping women eat healthier during pregnancy significantly reduced the rates of pregnancy and birth complications among his patients. The Dr. Brewer Diet is recommended by many childbirth educators and midwives as a way to increase your odds of having a healthy baby and low risk birth.

One good building block for a healthy diet is whole grains. There are a lot of white bread products in America, though there seems to be a trend recently to return to whole grains. I used to eat a lot of white bread, white pasta, etc. I have learned, however, to love the flavors of whole grains. Some of the best premium whole grain breads, however, are quite expensive. I have found that after an initial investment in some equipment (which I recieved as gifts!) you can get get all the great nutrition at a lower price, and you can also know what everything that's in your bread is.

I got a grain mill from my parents for Christmas (I asked for one). I wanted to mill my own whole wheat flour because I heard that the kind you buy from the store lacks some of the nutrition of home-milled. I used my home-milled flour for pancakes, waffles, and chocolate chip cookies (they also have chopped rolled oats in them, so you don't taste the wheat-y flavor). I wanted to make bread but it's kind of an all-day thing that kind of takes a lot to commit to. I had been talking about how I would like a bread machine because they really simplify the process.

Well, Husband got me a bread machine for mother's day. He told me he felt like it bordered on the taboo of giving a wife cleaning supplies as a gift, but I told him I didn't care, because the bread machine was what I had wanted.

I made a one pound loaf the day I got it, using part home-milled flour and part all-purpose. It turned out pretty good, despite not having bread flour. I didn't have any powdered milk, so I looked up how to replace powered milk with fresh, and found this in response to an online Q&A:

If you are asked for dry milk for a bread recipe you can use the following substitution:

The milk solids add only colour and a dash of nutrients so you can either sub some of your water for milk or skip it all together without any problems. (09/28/2008)

Anatomy of a Wheat Kernel

(http://www.horizonmilling.com/wheat/wheat_parts.shtml)
The wheat kernel is made up of three parts: the germ, the endosperm, and the bran. The germ is the embryo of the wheat plant and contains oils and vitamin E. All commercial flours (including those called "whole wheat") have the germ removed because it is what causes flour to spoil quickly. Removing the germ extends the shelf life of the flour but changes the taste, texture, and nutritious content of the bread it makes. Commercial "whole wheat" flour is made of the endosperm and the bran. The bran is the outer protective layers of the wheat kernel. Bran is kind of like the membranes a human fetus has or the shell of an egg. Bran contains fiber and nutrients. White flour contains only the endosperm. The endosperm is the food source for the plant embryo, sort of like an egg yolk. The endosperm is mostly carbohydrate and a little protein. The protein in wheat is called gluten. I have known people who had gluten allergies, but I never really understood what exactly it meant. Gluten is also what a vegetarian meat substitute called seitan is made out of.

The difference between commercial all-purpose flour and commercial bread flour (whether white or wheat) is the gluten content. Higher amounts of gluten in the flour will give the dough more rise, and will cause the bread that is produced to be chewy. There is an ingredient you can buy called Vital Wheat Gluten which you can add to any flour to make it a high-gluten flour. I don't see anything wrong with adding gluten, since it is a natural part of the wheat, you're just changing the ratio of the wheat contents. And protein is good for you, especially during pregnancy--it is one of the most stressed parts of the Brewer Diet. I bout some at my local natural foods store and added it to a loaf I made entirely of home-milled flour. It baked up nice and big and had a great taste and texture. I looked at the ingredients on a bag of tasty oat & honey bread I had from the supermarket. Sure enough, vital wheat gluten was on the list.

Here are some pictures of my lovely bread made with added gluten: 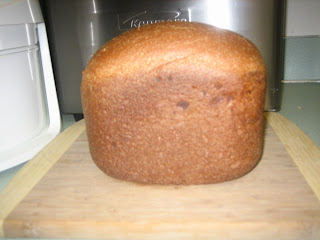 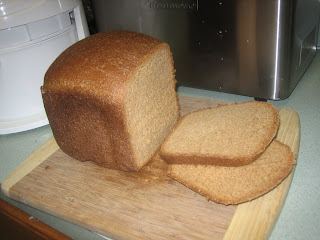 I also want to mention I great site I found called www.breadmachinedigest.com. Lots of good info on home milling, bread machines, and different bread ingreidents.
Posted by Brittany at 5:00 PM