Last night, my husband and I caught a re-run of Episode 7 of ABC's summer series Rookie Blue. This was our first time seeing the show. It follows the lives of five fresh out of The Academy cops.

Episode 7 featured a power outage during a heat wave. One of the story lines involved Officers Gail Peck (Charlotte Sullivan) and Dov Epstein (Gregory Smith) stumbling upon a pregnant woman in her apartment who appears to be in labor, characterized by her grabbing her belly and screaming bloody murder every few minutes. She says she is not due for another month. Her water breaks, and after she is shown on the phone, she tells the cops that she is planning a homebirth and has just spoken to her midwife and is calling her doula next. Gail turns to Dov and asks him "What is a doula?" to which he responds, "A birth coach for hippies." Peck replies "I thought a birth coach was a birth coach for hippies." I was so offended by this characterization of doulas, I almost demanded my husband change the channel right then. Doulas are for everybody, and it is not only hippies who desire natural birth or homebirth. I wanted to see how this scenario played out, so I kept watching.

Dov eventually realizes that the woman is agoraphobic and she tells them she has not left her house since she went off her meds when she started trying to get pregnant. While a woman going off her meds for the sake of her baby is highly commendable, this show seems to suggest that women who choose homebirth must be psychologically unstable or at least have irrational fears. So, now the message I'm getting is that women would have to either be a hippie or psychotic to want a homebirth, and this is far from the truth.

Despite Gail's insistence that the woman's baby is in danger and that they should just arrest the woman and take her to the hospital (really?), Dov sees that the baby is coming fast (as is typical of television births) and he is going to have to "deliver" it himself. Dov catches a very large baby for being "preterm" and which has no vernix on it, and Gail cuts the cord the second the baby emerges, with no mention of clamps (the myth that it is necessary to cut the cord immediately has GOT to stop!) Dov convinces the woman to go with her baby to the hospital to get it checked out (a good example of a woman willing to do anything for her baby), and Dov and Gail grin at each other over the experience. 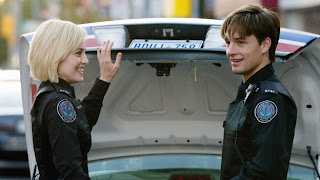 Gail even later tells her boyfriend that how great she did (what did she do besides bring negativity to the room and prematurely cut an unclamped cord?) On the other hand, perhaps Dov should leave the Force in favor of becoming a male midwife?

If you want to watch the episode yourself, you can view it here.
Posted by Brittany at 6:28 PM