Passing knowledge on to the next generation 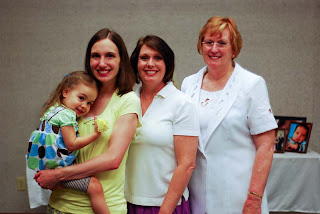 Photo by Jordan Gillespie.
This is a photo of four generations of women (left to right: my daughter, me, my mother, and my grandmother) taken at my grandparents' 50th wedding Anniversary this summer.

I've been thinking about how sometimes our choices impact future generations. There has been a lot of talk about circumcision lately, due to reports that the circumcision rate has dropped drastically over the past four years. The vulnerability of circumcised men is one of the reasons that circumcision has been perpetuated from generation to generation in America.

Interestingly, both my husband's and my parents, having children in the '80s when the circumcision rates in the U.S. were somewhere around 80%, broke with this particular tradition. After recently reading an article that discussed how circumcision affects sexuality, I feel that I am lucky that my mother-in-law chose to stick with what was normal in the culture she grew up in, regardless of the culture she was living in at the time. My in-laws' decision made the decision to keep our son intact very easy. The more people stop circumcision in their own families, the faster the custom of non-religious routine infant circumcision will end, since circumcised adult males are some of the biggest propagators of circumcision myths, (for reasons explained in the piece on vulnerability linked above).

I've been thinking about other things mothers can do to benefit future generations. My own mother had a beautiful birth journey. Her first was born by induction for term PROM (sound familiar?) with an epidural and forceps. She had hoped to avoid interventions because she didn't have health insurance, but she was birthing at a hospital and with a doctor both still known for being very medical model (and her doctor was still praciting when I had my daughter in that same town, though I went to a different hospital). Her other three she was able to have less medicalized experiences, using shots of narcotics for two of them and having a drug free birth with her fourth and final birth. Her two youngest were caught by nurse-midwives.
I did not know any of this until I was about 7 to 8 months pregnant with my first and told my parents I had decided I wanted a natural birth and was considering switching to a group of nurse-midwives. My mom had never mentioned her birth experiences to me. I never knew she'd had a bad experience with an induction and epidural or that she had a natural birth. I would have been nice to have grown up knowing that natural childbirth was not something to be feared, that there were women who still "do" natural childbirth, and my mother is one of them. I don't begrudge the journey I've taken myself, it is part of what feeds my fire, but I have a dream for my own children.
My dream is that my daughter (and any sisters that may come along) will grow up knowing that birth is not something she needs to fear--I hope she will know that her experiences giving birth matter, that birth can be a special experience for a woman. I hope that she will respect the amazing power her body to create life, and to celebrate it.

"Mothers who have fears also hand down fearful attitudes about birth to daughters--and to every other woman who will listen. But each woman who gains the confidence to birth as unhindered or freely as her biological circumstances will allow--she will go on to encourage her sisters and daughters with birth words and images which resound with all the potential strength and beauty of birth." --Jan Tritten
If not my children, perhaps my grandchildren, will live in a world where fear of birth is not the dominant attitude; a society where the medical world provides support and back-up for the natural process of childbirth; a world where all women are confident in their ability to give birth.