I just finished reading Taking Charge of Your Fertility by Toni Weschler. I had been wanting to read it for a while, and it is on the Childbirth International reading list, of which I have to read 3 books for my doula training. Although I had already learned the basics of fertility charting from the internet (and charted a little while trying to conceive my first), this book opened up a whole world of understanding for me about the female body, as well as a better understanding of my own (somewhat strange) gynecological history.

Progesterone's Role in the Menstrual Cycle

This chart shows the changes in hormone levels throughout the female cycle. 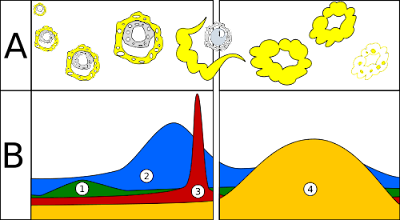 Part A depicts the follicle maturing, releasing the egg at ovulation, and acting as the corpus luteum after ovulation. Part B shows the changes in hormone levels throughout the cycle:
Here is a somewhat simplified explanation: Follicle stimulating hormone (1) causes follicles on the ovary to mature. These follicle release estrogen (2) and when the estrogen reaches a certain level, a surge of luteinizing hormone (3), which is the hormone ovulation predictor kits measure, occurs which triggers ovulation and one of the follicles releases an egg. That follicle then becomes the corpus luteum, which secretes progesterone (4). All of these hormones are amazing, but progesterone is the star of this post.

Progesterone has a warming effect on the body, which is why there is a shift in basal body temperature after ovulation. Progesterone sustains the lining of the uterus for the second half of the menstrual cycle, until the corpus luteum disintegrates, resulting in a drop in progesterone, which triggers menstruation. In late 2006 and early 2007, after I went off the birth control pill, before my daughter was conceived, I was anovulatory. My gynecologist prescribed an oral form of progesterone, which I was to take for a few days and then the drop in progesterone would trigger a bleed, which it did.

If the corpus luteum is not producing enough progesterone, the uterine lining would be unable to support implantation of a fertilized egg, often characterized by either spotting in this phase or menstruation starting too soon. In the fall of 2008, when I was breastfeeding my daughter, I was having issues with constant spotting. I took an herb called Vitex, which is said to increase the progesterone secreted by the corpus luteum. The spotting stopped, and I began to have menstrual cycles, so whatever the Vitex did to my hormonal balance, it worked.

If the egg is fertilized and implants, it secretes HCG, which is the hormone that changes the color of the second line on the pregnancy test. HCG tells the corpus luteum not to disintegrate and it continues to secrete progesterone, keeping the contents of the uterus in, until the placenta is fully formed and takes over the secretion of this hormone. The warming effect of progesterone continues in pregnancy, so the woman's core temperature remains at the slightly elevated post-ovulation level.

Initiation of labor is a complex process, and what exactly starts it is not known. A signal from the fetal lungs is proven to be one factor. Progesterone withdrawal, like that which causes menstruation, is a well-known theory, and probably also plays a role. Progesterone is said to inhibit oxytocin. That would explain why most women do not experience pre-term labor from activities that increase oxytocin levels, such as sex or breastfeeding. Oxytocin is free to cause contractions after the progesterone level has dropped.

Perhaps lowered progesterone levels when spontaneous labor is imminent is the reason that natural and low-tech induction methods such as membrane stripping (which triggers prostoglandins), breast pumps (which trigger oxytocin), and intercourse (which, if done correctly, does both), only start labor "when the body is ready." You can also see how trying to use artificial oxytocin to induce women whose progesterone level is still high could be tricky.

The body's process of starting labor and the role of different factors in it is something I'm quite curious about and hope more research is done on in the future. I'd be very interested to know what causes contractions to change from Braxton Hick's to ones that feel more intense, and why some women experience these more intense contractions on and off for days or weeks before entering active labor.

The more I learn, the more amazed I am by the human female body!
Posted by Brittany at 7:25 PM