Joseph B. DeLee: Obstetrics that Sucks 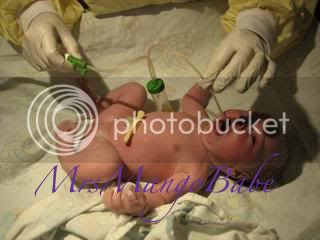 My first baby being suctioned with a DeLee Mucus Trap
Joseph B. DeLee, inventor of the suctioning device still commonly used in American hospitals today (though routine suctioning might actually be harmful), was an obstetrician in the early 1900s. In my Childbirth International workbook, I came across this lovely quote from him:

If the profession would realize that parturition viewed with modern eyes is no longer a normal function, but has imposing pathologic dignity, the midwife would be impossible even of mention.-Dr. Joseph DeLee, 1915

Sometimes the words of Dr. DeLee are so extreme they sound like satire. They're not. The guy was serious. I first read about him in Tina Cassidy's book Birth, the Surprising History of How We are Born, which is a very easy-to-read tracing of the history of obstetrics and midwifery in the U.S.--The author of which, who had a standard hospital birth-turned-cesarean for her first birth, came out of the writing of the book a believer in midwifery, and had a HBAC with her second child (you can find the story if you dig around the archives of her blog). It was also in Cassidy's book that I first learned that a large percentage of women in the late 19th and early 20th century, including the population DeLee would have treated, were afflicted with rickets, a bone softening disorder caused by Vitamin D deficiency that often caused people to have severely deformed pelvises.

With a quick googling his name, I found that Jill at the Unnecessarian has already posted a whole series on the writings of Joseph B. DeLee:
Dr. DeLee was a very influential figure of his time, and his ideas were very shaping of the course maternity care in this country. The influence of DeLee resulted a wiping out of nearly all of the traditional body of knowledge about birth (luckily, a few "grand midwives" survived, mostly in the South, allowing one unbroken link to the midwifery past), and replaced it with an ideology that was not founded in science, but the belief that birth was a problem, and technology was the solution.

Science has helped American maternity care come a long way from DeLee's time, but the fact remains that the roots of our obstetric system are in the ideas of people who had a lot of things about birth wrong, at least when applied to a population of women with normally developed pelvises. I also believe he was wrong about midwives. Obstetrics (speaking of the profession generally and not of specific members) will continue to be at odds with those who support the midwifery model as long as it continues to dismiss the value of childbirth knowledge gathered by those who learn by being with woman.
Posted by Brittany at 9:33 PM