The Myth of "Early Labor" 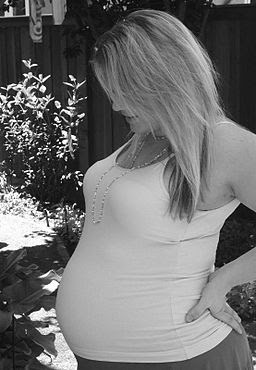 Expecting Mother By Petercantfail at en.wikipedia [Public domain], from Wikimedia Commons
As a science, medicine seeks to define things in specific terms. As a natural process, childbirth doesn't always fit into perfect little boxes. Childbirth education often uses the explanations from medicine in attempts to help women understand the birth process. However, based on my own observations, the "textbook labor" does not apply to the experiences of a very large proportion of birthing women, and I wonder if we are, by using it, doing women a disservice by creating false expectations.

The general model that is taught is that there are three stages of birth: dilation, pushing, and birth of the placenta. Within the dilation stage, three phases are taught: the early/latent phase, active phase, and "transition."
There are a few problems with this construction.
The impression that this model gives is that from "not in labor" to "in labor" is a one way street; once "labor" begins, you are "in labor" until your baby is born. I feel that this construct, together with unrealistic media portrayals of childbirth (where it always seems like a woman is going along minding her own business, suddenly her water breaks, chaos and rushing ensues, as well as some screaming, and then someone is handing her a "newborn" the size of a 3 month old), encourages women to head to the hospital as soon as they have contracting sensations that they can tell are more intense than the Braxton Hick's they have been having.

I have been participating in an online support forum for women who are planning natural births for about 3 years now. On our group, we have a fun tradition called Lodges, which are a sort of journal for pregnant women that lasts from 36 weeks to about 1 month postpartum. I have followed many lodges in the past three years, so I have read updates from women as they are nearing the births of their babies. From my own informal observations, it appears to me that a majority of women experience periods of regular and intense pressure waves (not Braxton Hicks, but the same kind you have during birthing) on and off for days, weeks, and in some cases months, before giving birth. They will go long periods with no pressure waves, then have them start again for a few hours, then they'll go away. So, does early labor stop? Can early labor last for two weeks? Or is our idea of "early labor" a myth?

Some people would call the off-and on periods of pressure waves "false labor," but I really dislike that language because it implies that the woman doesn't know what she's feeling. In many cases, the only way to tell the difference is in retrospect: sometimes they go away and sometimes they continue to the birth of a baby, they usually don't really feel much different from each other, contrary to what some will tell you. "False labor" also implies that it is not doing anything, and I am of the opinion all pressure waves do something, even if it is not causing measurable dilation. It could be effacing the cervix or encouraging the baby to rotate into a better position. In some cases, dilation is occurring, just not quickly enough for it to be measurable. For women who have "false labor," it may just be that their body does the "early labor" work incrementally, with long periods of rest.

The problem is that I suspect that the majority of women don't know how common start-stop labor (as I like to call it) really is. I recently read a blog post by a nurse (shared on facebook by The Deranged Housewife) who blamed the "need" for hospitals to use pitocin on women going to the hosptial and getting epidurals too early. Comments on the facebook link suggested that the problem is not the patients themselves, but that someone is failing to adequately inform them what the end of pregnancy is really like. The nurse's post really made me wonder how many women are getting pitocin for "stalled labor" when actually they were having an episode of pressure waves that would have gone away? How many of these babies would actually have come days or weeks later without the pitocin?

(On a similar note, I also love this post by midwife Stephanie of Vita Mutari questioning the logic that it is "safe" to "labor at home as long as possible" in order to avoid crowding the labor and delivery floor and avoid interventions, yet "unsafe" to plan a homebirth with a midwife.)

The concept of "early labor" is misleading because it is so easy to mistake start-stop labor for "early labor," and if women assume "this is it"and run to the hospital at the first sign of a pressure wave, they are guaranteed to either be sent home disappointed or have a whole lot of interventions, and neither of those is a desirable thing. I know I fell into the "early labor" trap myself with my first birth--I remember thinking "I've been in early labor for two days and I'm only 1 centimeter?"

For real, human women, not mythical "textbook" ones, the onset of the birthing time is a fluid process that they may move in and out of at their own unique pace. The last few weeks of pregnancy are the orchestra tuning up before the concerto, the engines revving before the race.
Posted by Brittany at 9:00 AM