When a woman is giving birth, moving her hips can be helpful for her to feel more comfortable and can encourage rotation and descent of the baby. In childbirth education, we try to teach women how to do "hip circles" during pregnancy, but it usually feels a bit awkward. Some cultures have got it figured out: teach these movements to girls long before they ever become pregnant as part of fun dances, and then it will be natural to do it during birth. Many traditional cultures have dances that teach movement of the hips or abdomen, including the hula and other dances from the Polynesian Islands, the various dances of Latin America, and Middle Eastern "belly dancing."

Dancer discovers link between birth and "belly" dance in 1961

Morocco (Carolina Varga Dinicu) is a world-renowned dancer, choreographer, dance researcher, and dance instructor in the Mideastern and North African styles of dance (she does not use the term"belly dancing," because she considers it offensive. She prefers the traditional name, Raks Sharki, or its correct translation "Oriental Dance"). Creator of the acclaimed dance company and school, Morocco & the Casbah Dance Experience, Morocco has won multiple awards for her work. She has dedicated over 50 years of her life to studying, performing, and preserving traditional dances from these regions. Morocco says she hopes to keep performing, teaching, writing, and lecturing "'till 6 weeks after I'm dead."(quote from Morocco's bio, used with permission) Click here to see a video from 2006 of Morocco dancing the Bahlam Beek and Drum solo.

In the 1960s, Morocco had some interesting experiences that allowed her to discover that two of the movements in Oriental dance, the "flutter" and the "camel," were based on movements women instinctively do during childbirth. She learned that these movements were historically part of childbirth rituals, a tradition that was continued only in small villages at that time, where women surrounded the birthing women and did these movements so that she could easily imitate them. In 1967, Morocco had a rare opportunity to witness a birth in a Moroccan village where this tradition was still practiced. The entire (very interesting) story is told in her article, Dancing the Baby Into the World.

Videos of Women Dancing during Birthing

The video below shows Elisa, who stars in The Perfect Pregnancy Workout, Vol 3: Belly Dance for Labor narrating video footage of herself in the hospital during the birth of her first baby. She talks about how her dance training and practice helped her remain mobile and comfortable during her birth.


In this video, Catherine is about 8 cm dilated with contractions 2 minutes apart. She is using a TENs machine, so you can see when her contractions start and end by when she pushes the button, but she doesn't stop dancing! She danced for much of active dilation, and her baby was posterior before the dancing, and rotated anterior during it.


This video shows Alexandria, in the hospital a few hours before the birth of her first baby, dancing to a lullaby version of the Guns 'N Roses song Sweet Child o' Mine. She took a class that combined moves from various types of world dance. She has two contractions during the dance, and keeps dancing right through them without missing a step! I can't even tell when she is having them!

You can read Alexandria's birth story by clicking "show more" beneath the video on YouTube.

If you are interested in finding an instructor near you or in getting certified to teach a prenatal dance class that focuses on birth empowerment and incorporates dance movements of traditional dances from around the world, including the Middle East, Africa, Central and South America, and the Caribbean (the method Alexandria in the last video took her class in), visit www.dancingforbirth.com 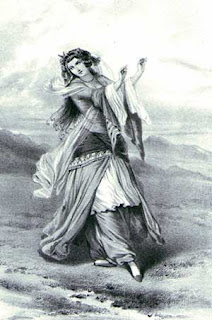