"Another Bun in the Oven": My Big Announcement!

In March, we felt that the Lord wanted us to open ourselves up to having our next baby, and we decided to stop preventing. On April Fools Day, I took one of the new super-sensitive pregnancy tests that is supposed to be able to detect pregnancy as early as six days before your missed period (that is only 8 days after ovulation!). I figured I was about 10-12 days past ovulation at this point (wasn't keeping very careful track of my fertility signs that cycle, so I only knew a 3 day range of when ovulation probably occurred). At first, I thought the test was negative, but then, it appeared,--a very faint second line! Considering the day it was, I decided not to tell anyone else that day because I didn't want anyone to think it was a joke. I also wanted to confirm with another test and that was my last one (I'd taken some the cycle before because my luteal phase was suddenly not short anymore that cycle), so I bought a digital test that day to take the next morning (which came back as an unmistakeable "pregnant."). I wanted to tell my husband in a fun way, since I had never done anything fun to tell him the two previous times. I looked up some ideas online, and I found one I really liked...

I had mentioned to my husband that I wanted to try to make cinnamon rolls sometime. That weekend was the LDS General Conference, and since we have satellite, we planned to stay in all weekend and watch the conference on TV. My husband grew up in Utah, where conference is broadcast locally, and in his family, the tradition was to cook good food that whole weekend.

I decided it was the perfect time to try to make some cinnamon rolls, and I could use them as a way to tell my husband the big news. I found Alton Brown's cinnamon rolls recipe (I love his show on the Food Network, and although a lot of times his way of cooking is "the long way" it is also usually "the good way"), and I started the dough on Friday afternoon.

On Saturday morning, after the rolls were risen, I put them in to bake during one of the choir's songs. I sat down next to my husband on the couch and announced,
"The buns are in the oven!"

He gave me a questioning look.

I pulled two positive pregnancy tests out of my pocket as I said, "And they're not the only buns in the oven!"

My husband was so excited and thought my way of telling him was very clever. I had fun with it. My husband loved the cinnamon rolls. I don't really like cinnamon rolls that much--the frosting is too sweet for me, but they were good for what they were.

I didn't take a picture, but here is a picture I found that looks a lot like my "buns in the oven" when I put them in: 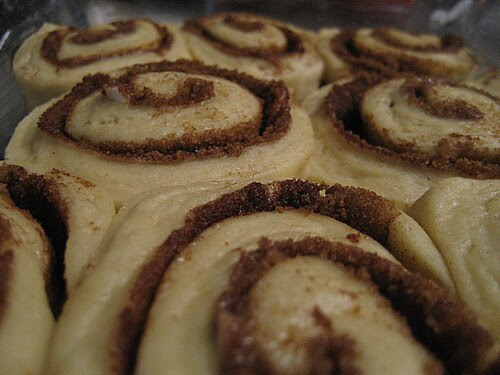 Email ThisBlogThis!Share to TwitterShare to FacebookShare to Pinterest
Labels: my journey, our third baby, pregnancy