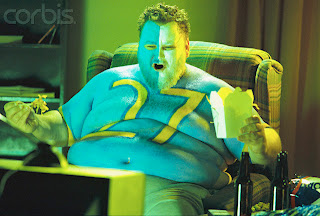 Ok, I'm not talking exactly talking about that kind of "armchair quaterback," but with it being football season, it seems appropriate.

I recently stayed up late to watch a birth that took place a The Farm midwifery center broadcast live on the internet.  A mom named Talina (@TalinaN on twitter, blog: Harvest of Daily Life) was giving birth to her second baby, and Pamela Hunt was her midwife, along with two midwifery assistants.  I got into the event, and even posted a few tweets with the hashtag #twitterbirth.  The first site I was watching it on stopped working, but I found it on another site.  The second site had a live chat running to the side of the video, and, honestly, it started to really annoy me.  I was really bothered by the "armchair quarterbacking" (or perhaps in this case, "armchair midwifing") of the birth.  Many people were judging the birth and imposing their ideas about the best kind of birthing on it. People complained that the midwives were doing vaginal exams, that one of them was sitting on the birth bed while the mom was in the shower, that they were touching things and not changing gloves, that they were using a Doppler to listen to the baby's heartrate, etc.  They also questioned Talina's birthing position (semi-sitting on the bed with her husband behind her), claiming that the birth would go faster if she squatted.  As the birth was getting closer, I switched the video to full screen, both to see the birth better, and so that I wouldn't see any more comments from the peanut gallery.  I watched a beautiful, healthy baby girl born with her daddy and (adorable) big sister in the room.  The whole family seemed very happy with the birth, and in the end, isn't that all that matters?

A few days later, I followed updates on facebook of the birthing experience of Navelgazing Midwife's daughter, Meghann, giving birth to her first baby and NgM's first grandchild.  Meghann was using Hypnobabies.  I posted comments of support throughout a long and obviously challenging journey to the birth of her baby by cesarean.  I did not see the actual birth announcement because I was at the park with my kids (and that was before I got my new phone, so I didn't get facebook on my phone yet!), and I also apparently missed some comments (deleted by the time I was reading) on the fact that Meghann had a cesarean section that were offensive to the new grandmother.  She wrote about her feelings on this here.  An excerpt:


But, when things shifted and it was obvious a cesarean was necessary, a couple of purists felt it was their place to comment… er, judge… what they thought was happening, without the benefit of actually knowing because I wasn’t expressing everything online.

My recent doula client also gave birth by cesarean because her baby turned breech during active labor.  In my postpartum visit, she told me that she had shared her birth story online and she had people telling her that it was because she had her membranes stripped the day she went into labor (after three days of non-progressing pressure waves, and at the same gestation that her previous child was born) that she ended up with a c-section.  Apparently, according to comments she got, having your membranes stripped is "just asking for a c-section." Come on, people!  Are you kidding me?

I just think the judging of other people's births has got to stop.  We don't have all the information, and even if we did, we are not that woman and we can't know her heart.  What she chooses is her choice, and if she seems happy with it, can we please just leave it at that?  Can we please leave the armchair quaterbacking to the sports fans and focus on supporting other women in whatever is the best birth for them?