144 Capsules of Awesome (or, What I Did With My Placenta)

This post contains "graphic" images of a human placenta, as well as discussion of the ingestion of placenta.  If you don't want to read about these things, then don't read it.  If you still choose to read it, then you can't say I didn't warn you...

Lets begin with some interesting things about this placenta.  It was on the large size, as placenta's go.  Here is a picture of the fetal side, with the umbilical cord branching into a "Tree of Life"

What is different about this placenta was the maternal side.  It was more...lumpy than normal.  I don't know the correct scientific words to describe this phenomenon.  It was all divided up into separate pieces.

One possible explanation I heard for this is that it could be nutrition-related and that it is usually associated with small babies.  My daughter, though not really small, at 6 lbs 11 oz, was a whole 15 oz lighter than her brother, my biggest.   She has put on weight really quick, though.  She's 11 lbs 9 oz at 2 months!

Another unsual thing was my baby's umbilical cord, which I didn't get a picture of.  She had a short cord, so short that the only way I could hold her in the water with the cord attached was right against mychest.

The midwives noticed a small gush of blood in the water as the baby was born, and they also said said that her cord did not pulse as long as they typically do.  They think they discovered why when they examined the cord later.  The cord appeared to be damaged. It had three spots, right near each other, where the Wharton's jelly was missing.  They think this damage must have been what caused the blood and the shorter pulsing time.  They said that they had only seen one other cord like that, which was also a short cord, and those spots were right around where the cord had snapped in two as that baby was being born.

So, on to what I did with the placenta.  When I first heard of placentophagy, I thought it was totally gross.  I thought burying it under a tree might be more my style.  But then I had depression in my pregnancy, and wanted to do anything I could to avoid having it postpartum as well.  Although I was hesitant to do something with so little human research evidence, the logic behind it made sense to me and I figured that I didn't really have anything to loose.  Human placenta pills have been used in Traditional Chinese Medicine for thousands of years.  I have a friend who is also a doula and childbirth educator, who recently started training to become a midwife.  And she's a placenta encapsulation specialist.

My husband heard me tell the midwives that I was considering having this friend encapsulate my placenta, and he asked me why I had to be so weird.  He feels having a homebirth is weird enough, why do I have to go doing things like eating placenta? (Yes, he still thinks homebirth is weird, even after catching our daughter in a plastic pool in our bedroom.  Still thinks its weird, but understands why I prefer it.)

My friend came by about a week after the baby was born to prepare the placenta.  The process is pretty simple.  I watched and we chatted about the birth.  She stuffed the membranes with lemon, ginger, and jalapeno (in attempt to negate the post-pill burp issue) and steamed the placenta (steaming causes it to shrink considerably).

Next, she removed the membranes and diced it up and put it on a foil-lined cookie sheet, which she put in the oven set at the lowest temperature.  She told me to check it after about 8 hours to see if the pieces easily snapped in half, and then to turn it off.  She came the next day to grind it and put it into capsules.  It became 144 placenta pills.

I do believe that taking the pills during the first month postpartum was helpful for me, if nothing else but to increase my iron levels (as I was anemic during pregnancy).  I have had really good postpartum experience, but I've never had issues with feeling depressed after my other births (only ever had a problem during this pregnancy), so it may have nothing to do with the placenta, but I think it has helped at least some.  I take them occasionally now when I feel run down or emotional, and it could be placebo, but it seems to help.  I still have quite a few left.  I have no regrets about doing it. 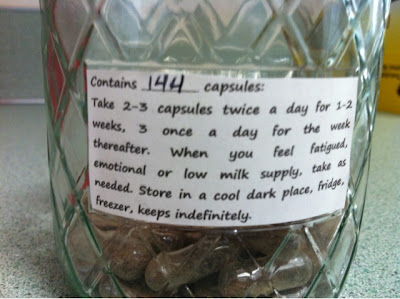