I taught for my daughter's preschool again. We lost one of the families in the co-op because they moved across town. We found a new family to join, but at the time I taught, we only had 4 kids in the class.

We did two days of pumpkin lessons. I checked out every book I could find on pumpkins from our public library. The children's favorite was Pumpkin Day by Nancy Elizabeth Wallace, a fiction book about a family of bunnies going to a pumkin patch. The other titles we read were The Pumkin Book by Gail Gibbons (non-fiction, hand illustrations), Pumkins by Ken Robbins (non-fiction, photo illustraited), and Pumpkin Jack by Will Hubbell (fiction). Songs we sang were Five Little Pumpkins and a Halloween version of Ring Around The Rosy, called Ring Around the Pumpkin.

Pumpkin Day talks a lot about cooking with pumpkin, and includes some recipes. The day we read that one, we made pumpkin muffins. I used this recipe from all recipies, but left out the raisins and walnuts and substituted some ginger and allspice for the cloves, because I couldn't find the ground cloves I know I have somewhere, and I thought it would be good with a variety of spices. I took all the ingredients to my kitchen table, along with a big bowl, and had the children all help dump flour, sugar, etc into the bowl. I had them all smell all of the spices as we were putting them in. They got to help crack the eggs (messy!) and stir the batter. They had a lot of fun with it. They came out perfect... 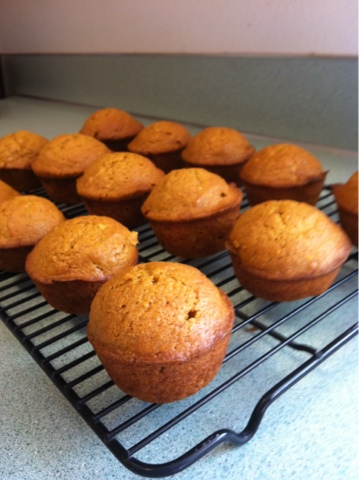 When I chose the recipe, I didn't look closely enough to realize that the yeild is 3 dozen muffins! I only have one muffin pan, so we had muffins our oven for much of the day! They made the house smell amazing, though! There were plenty to share some with friends and they all got eaten! After having our muffins for our snack, we decorated some mini pumpkins. The kids drew on them with markers and I helped them glue googly eyes on them. There were 4 orange pumpkins and 4 white ones. Only the youngest child chose a white one. The one with the eyes on the top of the pumpkin is the same child as the one who glued leaves on the trunk of her tree in the tree's and plants craft (she thinks outside of the box). The one in the back that has a mouth is my daughter's :) 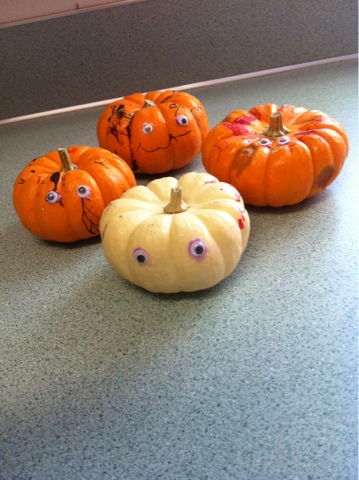 On the second day, we made paper plate pumpkins. I adapted this craft by using pre-cut construction paper for the facial features instead of cutting them out of the paper plate itself and gluing crepe paper on the back (it sounded like it would be too much work for me to do in the middle of the craft). Our color of the week was black and our shape for the week was a diamond, so the black diamond eyes seemed appropriate. I didn't get a picture of all of them, but this is my daughters (she is one of the oldest in the class, so she had better paint coverage and more face-like arrangement than some of the others) 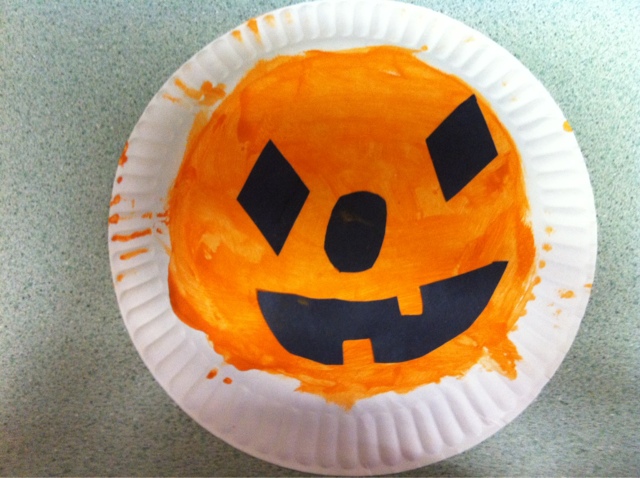 Yay for pumpkins! Have a great Halloween, everyone!
Posted by Brittany at 1:00 PM